How can you double the availability of your iPads?

More and more schools are taking up iPads, with teachers excited about the various ways they can be used. With the expense of the devices though, the plan is often to start off with a small amount at first. While cost-efficient, this does mean that some miss out as another class has already booked them.

However, did you know that the iPad can actually be the perfect device for working in pairs? Picture the scene: 15 iPads, one whole class fully absorbed in the task, or 30 iPads, two whole classes fully absorbed.

The iPad actually allows multiple touches meaning two students could be around one iPad and interacting with it, and each other, at the same time. For this to really be utilised, it does need to be with the right app, as not all make the most of this feature.

I’d like to introduce you to our free iPad app Digital Mysteries Lite: KS2. This is a result of years of academic research in Newcastle on collaborative learning and education in general. Because it has been specifically developed for true collaboration between pairs, it is ideal for schools who would like to spread their iPads out. 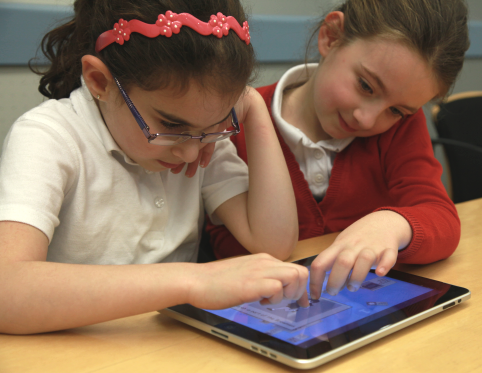 Whether this interests you probably depends on what the app entails. The good news is it’s a cross-curricula app which involves solving a ‘mystery’. Each mystery aligns to the National Curriculum for England, and our first version has tasks on English/PSHE, Maths and History.

Users are given illustrated slips of information which they read, organise into groups and move around the screen to show how they’ve came to their answer. This is in response to the open-ended question for each particular task.

An example is a pair working out ‘Who killed King Ted?’ by making calculations on the suspects’ whereabouts, medicine measurements and motorbike speeds.

If you’d like to try it, please click here or search Digital Mysteries on the App Store.
Posted by Reflective Thinking at 16:08

Collaborative, problem-solving apps in a variety of topics. Click here